The indigenous hubs focus on locations with indigenous knowledge pertaining to reindeer husbandry, fishing, hunting and the traditional use of other natural resources.

Indigenous communities live their lives across and parallel to the rest of Arctic society for parts of their sustenance. Simultaneously their lives are influenced by infrastructure and services often developed with someone else, living a different kind of life, in mind.

Due to the interconnectedness of indigenous communities with their territories,

indigenous peoples many times bear the cumulative brunt of all other development of the Arctic, which fractures and chips away from their lands and waters.

Although, the Arctic is often perceived to host mainly pristine nature and nomadic indigenous groups, in reality, industrialised economic activities are proliferating in the Arctic due to global drivers and pressures, and to the increasing accessibility of the region. Moreover, climate change has already forced changes in land use and traditional practices.

Indigenous communities of the Arctic are strongly affected by the cumulative effects of new industrial activities, and their cultures give rise to lifestyles, which are particularly vulnerable to the effects of global forces.

Developments in the region constrain the possibilities for continued reindeer husbandry, hunting, fishing and both contemporary and traditional use of the land, and thus for the sustainability of indigenous culture as such. Indigenous communities also have their own global networks. On an Arctic regional scale, these have concentrated around the six Arctic Indigenous organizations that hold Permanent Participant status in the Arctic Council – These are clustered into its Indigenous Peoples’ Secretariat.

Acting as nodes that connect geographical sites in a network structure, the six indigenous hubs included within the ArcticHubs project, are a driving force within Arctic development.

The research conducted within the ArcticHubs project aims to contribute towards scaling indigenous traditional knowledge in order to develop shared practices with different land-users, including mining, forestry and tourism, to enhance planning tools and create a sustainable future.

How is ArcticHubs entering the realm of indigenous communities?

Framed within this setting, the ArcticHubs project will concentrate on the following activities:

Where are the indigenous hubs located?

The six indigenous hubs selected by the ArcticHubs project for closer research and analysis, are clustered in the North of Fennoscandia and the West coast of Greenland. They include areas that are seeking to balance land-use with mining or other forest interests, along with the concerns in areas that are no longer sustaining traditional livelihoods, but seek to bring an indigenous perspective to alternative employment opportunities. 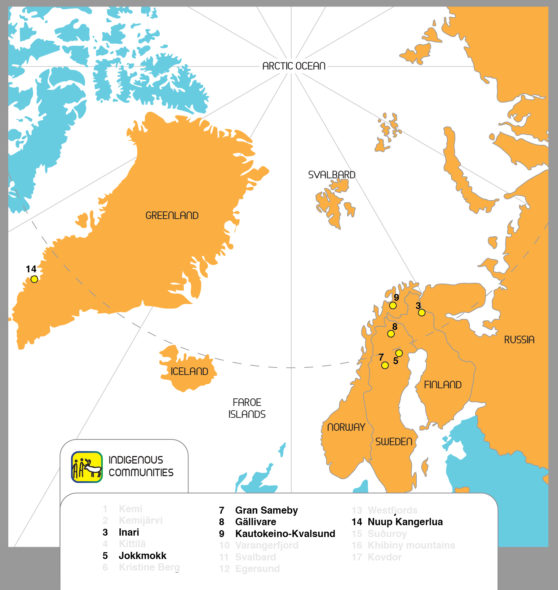 The research questions at our Arctic indigenous hubs, explore how traditional indigenous practices, which have long adapted to new conditions and competing land-uses, are at the forefront in adjusting to rapidly changing climatic conditions.

The research is focused upon Sámi and Inuit input around some of the following debates:

ArcticHubs research through the direct participation of indigenous partner organisations, and linkage to indigenous perspectives in a variety of hub settings, is ensuring an informed position when bringing those voices to policy and practice solutions.