Consumption of antimicrobials in food-producing animals

Finnish Medicines Agency Fimea has monitored the sales of veterinary antimicrobials in Finland since 1995 based on the information provided by pharmaceutical wholesalers. Fimea publishes data annually, expressed by unit of weight (kg of active ingredient). Reporting sales in units of weight does not, however, reflect changes in animal population.

1 mg/PCU is a technical unit. It describes the consumption of antimicrobials in proportion to the number of major food-producing animals. The need for medication varies greatly between animal species.  Therefore variations in the distribution of food-producing animals between different countries should be taken into consideration when the results are explored. Sources: (1) European Medicines Agency, European Surveillance of Veterinary Antimicrobial Consumption, 2018. ‘Sales of veterinary antimicrobial agents in 30 European countries in 2016’. Seventh ESVAC report (EMA/275982/2018). Link to report (2) Critically important Antimicrobials for Human Medicine 5th revision 2016, World Health Organisation, Link to report

Total sales of antimicrobials in proportion to the number of production animals in 30 EU/EEA countries in 2016 (mg/PCU, milligrammes of active ingredient per population correction unit)1 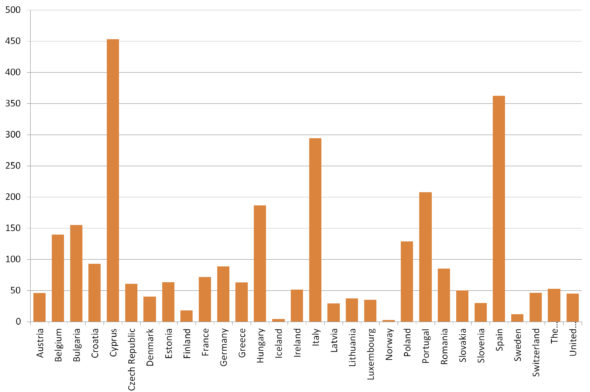 Although data specific to different animal species cannot be determined on the basis of the current method, it is possible to determine whether the medicine is administered to individual animals or groups of animals based on the pharmaceutical form in question. Individual medication is favoured in Finland, whereas in the joint results for Europe, most antimicrobials were administered to animal groups in feed or drinking water. In 2016, the proportion of injection products and other pharmaceutical forms used in individual medication was 60% in Finland, while in Europe, 90% of antimicrobials sold for use in food producing animals were administered to groups of animals.

A strong regulatory basis, determined guidance and focus on food-producing animal health care and the prevention of infectious diseases in animals have yielded results. The use of antimicrobials for food-producing animals is highly moderate in Finland in international terms.

The text is based on the lecture summary ‘Consumption of veterinary antimicrobials in Finland and internationally’ (K. Kivilahti-Mäntylä), the Annual Veterinary Congress Lecture Collection 2016.

World Organisation for Animal Health (OIE) Annual report on antimicrobial agents intended for use in animals, 2017