The World Health Organisation (WHO) maintains a Global Ambient Air Quality Database, which contains data on ambient particulate matter from almost one hundred countries and 3,000 cities in 2018. The data are collected from open public information sources. While particulate matter (PM) concentration is only one air pollution component, it is considered the best indicator of the health effects of air pollution. The global estimates of mortality from ambient air pollution regularly published by WHO are also based on this database.

The average fine particle (PM2.5) concentration in Finland is 6 micrograms per cubic metre (µg/m3), which is the lowest figure for an individual country in the global statistics for 2018.[1] Estonia, Sweden, Canada, Norway and Iceland reached almost equally low fine particle concentrations. At the time of the previous update published in 2016, Finland ranked third cleanest after Sweden and Canada.[2] 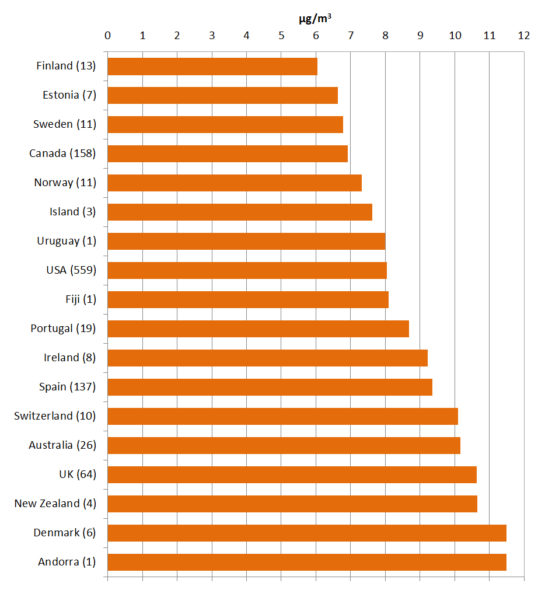 Source: WHO, Ambient Air Pollution Database, Update 2018, Link to database Note: The country averages are based on the update of May 2018. Only the latest measurement results from 2014–2016 were included. The averages only contain PM2.5 measurements, and the figures exclude particulate matter concentrations converted from PM10.

The data from developing countries are fraught with significant uncertainties, as the measurement quality may not be particularly reliable and the number of measurements is low, resulting in poor regional representativeness. However, the statistics highlight the immense air quality problems faced by developing countries.

A number of factors underlie the good ambient air quality in Finland. Finland is a sparsely populated country with no massive industrial hubs, and our cities are small by global comparison. We also have a rather good track record in complying with air pollution emission limits agreed upon in international conventions. Finnish industries employ high technology, and our energy production is efficient. By global standards, our car stock is also new.

Additionally, our climate is relatively humid and cool, which means low levels of photochemical pollution, such as ozone, and no sandstorms. The country’s even topography facilitates the dispersion of pollutants. Our northern location, far from the densely populated Central Europe, tends to reduce the amount of long range transported pollutants.

The EU publishes highly detailed European air quality statistics and summaries on a yearly basis. Almost without exception, Finland and the other Nordic countries are also the ones with the best ambient air quality in these statistics.[3]

[2] WHO: Air in Finland third cleanest in the world, Press release of the Finnish Meteorological Institute, 25.5.2016, Link to press release