The calculated nutrient balance does not, as such, describe the nutrient loading on water bodies in the short term, but it facilitates assessing its risk.

In Finland, nutrient balances have fallen throughout the country during the thirty-year review period; the main reason for this has been the decline in the use of commercial fertilisers. The nitrogen surplus per hectare has decreased from 90 kilogrammes to 54, and that of phosphorus from 30 to less than 6. Over the last few years, the balance surpluses have not decreased, and the differences between the growing seasons appear as variations in surpluses. The differences in regional averages are mainly due to the focus of livestock and cereal production in different regions.

As to the nutrient load on water bodies, it is important to determine the minimum nutrient in the receiving water body. In Finland, this is usually phosphorus. Its amount contributes directly to the eutrophication of water bodies. The high phosphorus content of livestock manure causes problems in certain areas, such as Southwest and Western Finland where pig and poultry farming are prominent. A recent nutrient study jointly completed by several research institutes found that at least 20% of the amount of manure produced in Finland requires advanced processing to make the transport of manure phosphorus over long distances outside the region economically feasible. Among other measures, this requires water removal from manure. The need for advanced processing is highest in the regions of Ostrobothnia, Satakunta and Southwest Finland.[1]

Nitrogen balances have decreased drastically throughout Europe over the last 25 years. Two factors explain this: (1) the decrease in the use of nitrogen fertilisers, and (2) the nitrogen binding in standing crop. With increasingly large harvests, more efficient use has been made of nitrogen in arable land.

High nitrogen balances increase the risk of high nitrate levels in groundwater, where they are a key indicator to be monitored. High nitrate content of household water poses a danger to health. Nitrate levels in surface and groundwaters in Finland are low compared to other European countries (Water quality and use).

In Europe, the acidity of agricultural land varies greatly between regions. In Finland, all soil is relatively acidic, with a pH of 5–6.

Acidity of agricultural land in Europe 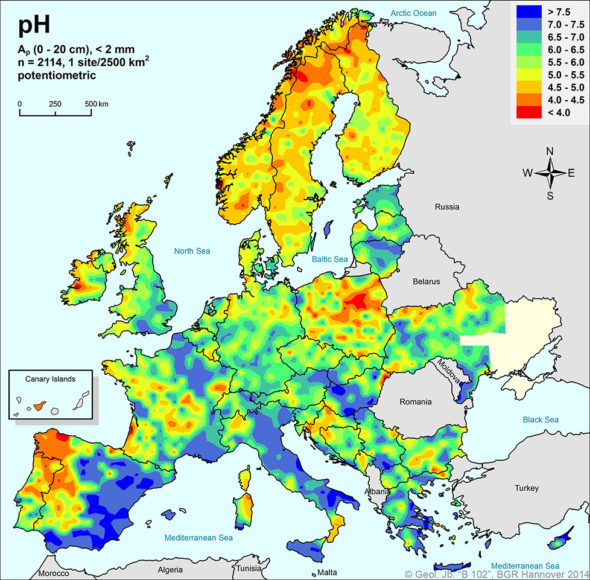 Acidic soils require more phosphorus for the production of high crop yields than neutral or alkaline land. Elsewhere in Europe, where the soil is neutral or alkaline, cultivated plants tend to need less phosphorus. In these areas, the result is a better phosphorus balance, which can, at its lowest, even be negative.